UPDATE 2016-10-14: A more polished version of this article can now be found on the Official Red Hat CloudForms Blog.

Most systems are using Access Control LIsts (ACL) to manage user access to objects. Common examples are ACL’s for file systems, LDAP, Web Servers and many more. Who ever had to create ACL rules and maintain them knows how complicated this can be. To make access control easy again, CloudForms and ManageIQ are using tags. If the group a user belongs to has the same tag associated as the accessed object, access is granted, if not, access is denied.

Sounds simple and straight forward. There are a couple of things to know about tags, which make it very powerful, but using them also a bit tricky. Let’s start with some basics.

Groups are used to define the scope or visibility of a user. For example, a member of the Engineering Department can be granted access to all VMs owned by the Engineering Department. Or an operator could be a member of the group Operations and be granted access to all VMs running in the production environment.

Roles are used to define which actions a user is allowed to perform. For example, an operator role could define all actions needed for an operator. This could include permissions to start or stop virtual machines, reconfigure them etc. A role “self service user” could allow a user to order new VMs and manage them.

Let’s discuss a couple of examples to get familiar with the model.

For the following exercises the internal database authentication has been used. That limits the examples to the restriction of one user is always in exactly one group. If a more flexible model is needed, where a user can be a member of multiple groups, an external authentication source like LDAP, Active Directory or FreeIPA (Red Hat Identity Manager) has to be used. But let’s keep it simple.

The way the user interface is designed, it makes sense to start with the role, then create the group and finally the user. Let’s keep tenants for later.

Navigate to “Settings”, “Configuration” and click on “Access Control” in the pane on the left. and then click on “Roles”. Add a new role by clicking on “Configuration”, “Add a new Role” name it “Self Service”. Granting privileges to the role is very nicely implemented. The tree on the right represents all the menus and actions a user can perform in the UI. Enabling (checking) a feature grants the privilege to the role. By drilling down into sub folders, very fine grained permissions can be granted (e.g. power on, but not power off).

For the purpose of this demo, a role with full access to “Cloud Intel”, “Services”, “Compute”, “Settings” and “Access Rules for all Virtual Machines” - but no other privileges - is created.

In the next step a group called “Engineering” is created. All members of this group will have the role “Self Service” assigned, which was created in the previous step. For now, we skip tags and filters and keep them all unchecked. 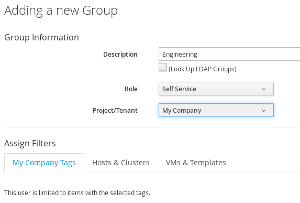 In the last step a user “Joe Doe” is created. This will be a local user (stored in the database) and is a member of the Engineering group. 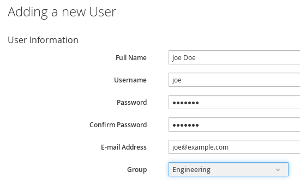 If Joe Doe logs into the web interface and navigates to Providers, Hosts, Virtual Machines or Service Catalogs he will see all existing objects. When the user was created, he was assigned to a group which doesn’t have any restrictions on visibility, so this should not be a surprise.

Navigate to the group, edit it and select the Department/Engineering Tag. 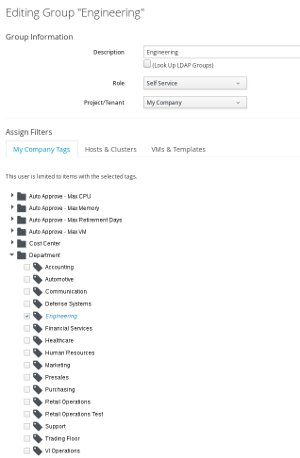 When changing groups, roles or tenants, the user doesn’t need to logout and login again. Changes are reflected on the next reload of the UI. If Joe reloads the UI, he will see no Virtual Machines or other objects anymore! The scope for the group and hence the user, was just limited to objects which are tagged as Department/Engineering - and no objects have been tagged so far.

An object, like a Virtual Machine, a Host, Data Store etc. can be tagged by using the “Policy”, “Edit Tags” menu. After tagging a Virtual Machine and reloading the Web UI as Joe Doe, the VM will show up in the user interface.

This works the same way for all other objects. If Joe Doe should be able to order a specific item from the service catalog, the item (or bundle) has to be tagged with the Department/Engineering tag to make it visible.

You might have noticed, after setting the Department/Engineering Tag for the Group, no objects are showing up in the UI. This means, all relevant objects which should be visible for the user, must be tagged. As soon as you start using tags, you have to use them consistently.

If a Virtual Machine or any other object has to be visible to multiple Departments, it’s solved by just adding all the necessary Department tags. Adding the Department/Finance tag to a service catalog item, makes the item available for order to members of the Finance team.

Tags in the same tag category are logical OR relationships. If at least one tag of the list of group tags in this category matches with at least one tag of the category of the target object, access is granted. In this example, if a user is in Department/Finance OR Department/Engineering, he or she will see the object. Users which are not in Engineering or Finance, will not see the object. This also applies, if the object isn’t tagged with any Department tag - which means, nobody will see it.

When working in more complex environments, multiple tag categories have to be used. For example, tags can be used to separate Virtual Machines from different stages (Development, QA, Production), or different tag categories could be used to be more granular by granting access to service catalog items.

As soon as multiple tag categories are introduced, things get a bit more complicated.

When using multiple tag categories, there is a logical AND between tag categories. This is probably best explained with an example. There is already an example tag category called “Environment” with tags associated like “Development”, “Production” and others.

This is very important and is often causing confusion. As soon as you start tagging objects of your infrastructure with tags of different tag categories, the logical AND comes into play!

Tags in the context of tenants

Tenants can be used to go even one step further when it comes to isolation and separation of the virtual and cloud infrastructure. Tenants can be nested and can also have projects as child elements. When working with tenants, it is important to remember that they limit also the visibility of objects.

If Joe Doe moves into a new tenant, he will only see objects like Virtual Machines, which are owned by this tenant or one of its sub tenants. Tags are filtered with logical AND. This means, Joe will only see objects which are part of the tenant or any of the sub tenants AND are tagged appropriately. Objects which are owned by a parent or sibling tenant will never be visible to Joe, even if they are tagged with the proper tag (in this example Department/Engineering).

Conclusion: Think before you tag

Tags are a very simple and yet powerful way to manage access control lists. Sometimes people tend to over complicate things though and this makes it unnecessarily complicated. There are a few rules we try to follow when we plan tagging: